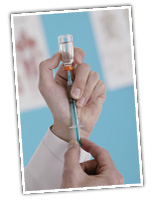 Growing up in India, I witnessed first-hand, the wrath of many infectious diseases. I clearly remember standing in a long line in my elementary school, waiting to get the small pox vaccination by the health care workers. The vaccination needles were long, with two prongs. I did not like being poked, especially more than once, but I was not given a choice. As a result, I never had small pox.

Years later, I realized that my small pox immunization was probably part of the World Health Organization’s (WHO) small pox eradication program. This global campaign, which was implemented effectively by WHO, with major US contribution, eliminated small pox from the world in 1979. If it weren’t for Edward Jenner in 1798, the inventor of the cow pox vaccine, I wonder what the world would be like today?

Fast forward in time, we now have vaccines to prevent many diseases that we tend to forget even existed. These vaccines have proven to be very safe and effective.  We are now generally involved in addressing the diseases for which we don’t have vaccines, such as Lyme disease, hepatitis C and HIV to name a few. Then suddenly we started to see the re-emergence of measles in California. What happened to one of the most successful stories of prevention in public health, what we know as immunization?

Even though I have not seen many of the miseries caused by vaccine preventable diseases in the US, as a medical student in India I had first-hand experience with many of them. I will never forget a young girl with polio, who could not walk; an infant and an old, frail man having severe muscle spasms and seizures due to tetanus; a teenager who could not swallow and breath because of diphtheria; and a robust, muscular farmer lying on the hospital bed disoriented and having fear of water (hydrophobia) and profoundly weak because of rabies. These may seem extreme examples to those who live in the US, but these diseases still exist in many parts of the world. The lack of resources limits the access to the basic immunization resulting in a lost opportunity to prevent these diseases. In that part of the world, people have no choice, they do not have access to these vaccines. But I did, and after I became a mother I chose to immunize my children, even though many of the infectious diseases are not seen in the United States. Why? Simply, for 3 reasons!

Did it work? Yes, it did. As a physician and mother it is very important for me to make sure that I am protecting the health and future of my children but also contributing towards maintaining a vaccine preventable disease free environment in my community. This ties directly into a healthy generation, environment and workforce. I followed the recommended guidelines by American Academy of Pediatrics, Centers for Disease Control and Prevention, and most importantly advice from my children’s pediatrician whom I trusted immensely. So you get the picture!

By now, you may have noticed that I am a great fan of prevention! What is prevention? According to Oxford English dictionary, prevention is “The action of stopping something from happening.” Most of us use the phrase “an ounce of prevention is worth a pound of cure.” So the question is, do you really believe in it? If so, do a self-audit of your health behavior and practices including what impacts your family, social network, neighborhoods and city. As part of my blog series, I am starting this conversation about the importance of immunization.

We have a heightened awareness of this very subject today because of the multistate measles outbreak. It is believed that an unvaccinated foreign visitor was at the Disneyland theme park in Anaheim, CA during the incubation period of the disease. Measles is a very highly contagious virus and spreads rapidly due to its capability of being airborne, which means that the virus can stay in the environment even 2 hours after he/she has left the area. As a result, the infection spreads easily. Due to declining rates of vaccination, a large number of unvaccinated children became ill. When more people in the community are vaccinated, it results in higher herd immunity. Now, if the virus tries to penetrate in such community by infecting one susceptible (probably unimmunized) individual, it will face a strong protective firewall created by those who are immunized. The higher the vaccination rate, the stronger the firewall. Isn’t it logical for us to have the best security system for our health when it comes to the vaccine preventable infectious diseases? We do everything to protect our homes and cars by installing the most sophisticated security systems. Similarly, immunization is the best security system to protect us from many of these infectious diseases.

So why the skepticism? In 1998, Dr. Andrew Wakefield published a study in the medical journal “Lancet,” which suggested a possible link between the MMR vaccine and autism. The study was retracted by the journal in 2010 on the basis of its fraudulent and unethical nature. The UK General Medical Council also stripped Dr. Wakefield of his medical license. Unfortunately, by this time, the tide of public opinion was significantly affected by wide media coverage resulting in severe damage to the vaccination efforts. The vaccination rates dropped both in England and the US, resulting in new measles outbreaks in these communities. In the US, at present most cases have been imported from foreign countries.

I believe that every parent has the best interest of their child’s well-being, including those who are against the recommended vaccinations. I would appeal to those parents, who fear vaccination, to revisit the devastation of infectious diseases in recent history, and feel the triumph of vaccination.  I would urge them to make the decision to protect their child, based on the multiple scientifically proven, time-tested wealth of publications and success stories of global efforts. Since 1998 when the safety of MMR was first questioned, repeated research has proven the vaccine to be safe, effective and lifesaving. But the controversy, which started in 1998 with Dr. Wakefield’s study, is reaching its climax as we see many outbreaks, which could have been prevented simply by this vaccine.

Fortunately the vaccination rates are high in our state of NY and Onondaga County. As a public health advocate, I applaud those who believe in the power of vaccination. Society appreciates their contribution in preventing disease outbreaks and a public health crisis. At the same time, I would reach out to those who have opposite views to review the evidence of science  and make an informed decision based on the proven benefits of vaccinations. This is the first step in building a healthy community.

Some references that may interest you: