In Onondaga County, African Americans are at a higher risk for poor health outcomes related to many chronic diseases, including those caused by tobacco use! Sadly, the tobacco industry has spent decades marketing menthol-flavored tobacco products in Black or African American communities1,2. 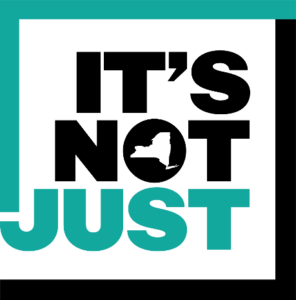 As a result, 85% of Black smokers use menthol cigarettes, compared to 29% of white smokers3,4. To bring awareness to this issue, Tobacco Free NYS and Tobacco-Free CNY have kicked off their new “It’s Not Just” campaign. This campaign will educate people across New York State that menthol tobacco products are not just flavored, are not just in communities, are not just addicting, and are not just an injustice – they’re killing Black Americans.

While menthol can be used safely in many everyday products, when added to cigarettes and other types of tobacco, the menthol flavor creates a cooling sensation in the throat and airways,5,6, masking the harshness and allowing the user to inhale more of the toxic and addictive ingredients. Due to the tobacco industry’s intentional marketing in Black or African American communities, menthol tobacco products are addicting and killing Black Americans at higher rates. Ninety-three percent of Black smokers started by using menthol cigarettes5,7. Black smokers die of heart attacks, strokes, and other causes linked to tobacco use at higher rates than white smokers, even though they smoke less than whites1,8-12.

To market these products in Black and other minority communities, menthol tobacco products are given more shelf space and are often marketed as “smooth” to make the product seem more appealing and disguise the dangers1,13. In addition to being heavily advertised and widely available, certain tobacco products have been found to be priced lower in Black communities, making them more appealing, particularly to youth14,15,16. Over 7 out of 10 Black youth ages 12-17 years who smoke use menthol cigarettes1,17.

This is a very timely campaign! In April of this year, the FDA announced that it would support a ban on menthol-flavored cigarettes. This decision was based on some of the facts below:

Tobacco-Free CNY is a program administered by the Onondaga County Health Department that works in Onondaga, Cayuga, and Oswego Counties to reduce illness, disability, and death related to tobacco use and secondhand smoke exposure through multiple community and youth-oriented goals. Tobacco-Free CNY plans to disseminate the campaign messaging within the three counties through various media channels and community engagement activities. To learn more about the “It’s Not Just” campaign and help to fight the injustice, visit www.notjustmenthol.org.